It’s hard to imagine a more favorable situation for gold. Interest rates in all major economies are at zero percent. At his press conference, FOMC Chair Powell committed to no rate hikes until the end of next year. The recent flare-up in coronavirus case counts increases the odds of more fiscal and monetary stimulus.

And when gold rallies, the gold miners do even better. Once gold is above a miner’s cost of production, each dollar increase in price goes straight to the bottom-line. Thus, they give higher-risk and higher-reward to the underlying metal. For example, when gold climbed from $1,050 to under $1,400 from January 2016 to August 2016, the VanEck Vectors Gold Miners ETF (GDX) gained 158%.

In the last few days, AU has broken out to a new 52-week high despite the large, sideways price action in gold. Since then, the stock has been digesting this move with low-volume, low-volatility trading. 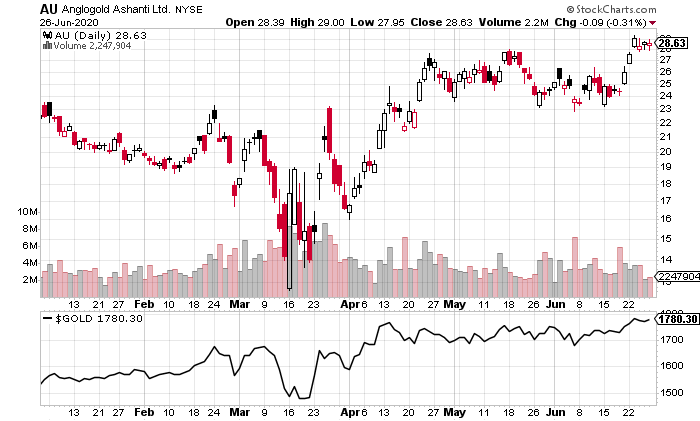 Its POWR Ratings also confirms this strength. It’s rated as a Strong Buy. It also has an “A” rating for Trade Grade and Buy & Hold Grade. It’s rated as a “B” for Peer Grade and Industry Rank. Among gold miners, it’s the #1 ranked stock.

Consistent with this strong price action and POWR Ratings, AU is projected to double its earnings over the next 12 months which gives it a forward price to earnings ratio of under 10. In comparison, the P/E of the gold miners ETF, GDX, is 30.

Like AU, GFI has made a new 52-week high in the last couple of days. Since bottoming in late-2018, the stock has consistently trended higher with a neat pattern of higher highs and higher lows. It also has accelerating earnings growth due to several new projects coming online.

Over the last 12 months, GFI earned $0.20 per share, and it’s expected to earn $1.06 per share in the coming 12 months. This gives it a forward price to earnings ratio of 8.8. GFI’s POWR Ratings are also strong. It has a Strong Buy rating with an “A” for Trade Grade, Buy & Hold Grade, and Peer Grade with a “B” in Industry Rank. It’s currently the #2 ranked stock in the Gold Miners group.

Conditions are eerily similar to 2008-2011 when gold went from $750 to over $1,900. At that time, the federal government was running trillion-dollar deficits, and the Fed was experimenting with aggressively easing. Today, the deficits are bigger, and the Fed’s policies are even more extreme.

One difference is that there was a consensus in 2008 that the combination of deficits, QE, and zero-percent interest rates would lead to an inflationary boom. This time, those concerns don’t exist. However, there’s a greater threat of inflation as money is being given to people and businesses more directly. In 2008, much of the stimulus was to increase confidence in the banking system which led to inflation in the financial economy but not the real economy.

During the selloff in March, nearly every asset endured selling pressure including gold. However, it’s one of a few asset classes which made a higher low and has already made a higher high. As optimism increased around reopening, gold’s advance paused. And it’s been range-bound since early-April between $1,700 and $1,800.

While gold has been range-bound, many gold miners are already starting to break higher. This relative strength is impressive and is foreshadowing that they will be market leaders if gold’s bull market continues.

Top 3 Investing Strategies for the Year Ahead

About the Author: Jamini Desai

Jaimini Desai has been a financial writer and reporter for nearly a decade. His goal is to help readers identify risks and opportunities in the markets. As a reporter, he covered the bond market, earnings, and economic data, publishing multiple times a day to readers all over the world. Learn more about Jaimini’s background, along with links to his most recent articles. More…

More Resources for the Stocks in this Article